THE FESTIVAL IS POSTPONED

Dear Friends of Cinema CNC:
up until 40 minutes ago, the Film Festival was going to go ahead; however, Provincial and Municipal initiatives to address the outbreak of Covid-19 have necessitated cancelling of large events for the near future. This means that there will be no festival this weekend.
It is our intention to postpone the festival until a more disease-free period [early May?] and, ideally, the line-up will remain the same. This means that tickets purchased and passes acquired will remain valid, just for a different day.
These are early minutes, so I haven't completely thought-out how best to proceed with refunds for those who would prefer this. Rest assured, you will be refunded, if that's what you desire.
Otherwise, the festival will happen, as promised, just on different days... stay tuned.
Unless, of course, this is the end-times as prophesied, in which case we will have some other concerns to discuss.
Please share and forward and tell your friends who might not see this message.

With sincere apologies,
Peter
Posted by cinemacnc at 20:23 1 comment: 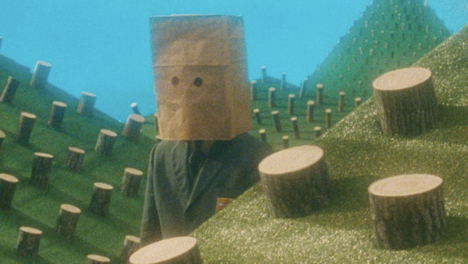 Winnipeg’s Matthew Rankin (The Tesla World Light) doubles down on his signature mode of gonzo history films with this bizarro biopic of William Lyon Mackenzie King, which reimagines the former Canadian Prime Minister’s early life as a series of abject humiliations, both professional and sexual.

"The movie is full of demonstrative acting and self-consciously verbose dialogue..., but other touches underscore the serious critique beneath the heightened silliness." - Kevin Ritchie, NOW Toronto

Posted by cinemacnc at 20:50 No comments: 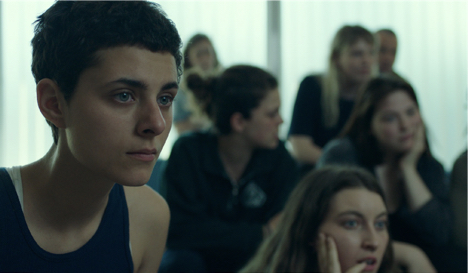 Gripping, powerful, and of-the-moment, Antigone loosely adapts Sophocles’ Greek tragedy and situates it in contemporary Montreal. The latest from critically acclaimed Québécois writer-director Sophie Deraspe (The Wolves, The Amina Profile) is a compassionate family drama that doesn’t hold back on its indictment of the current refugee and immigrant experience in North America.
Following the murder of their parents, Antigone, her sister Ismène, her brothers Étéocle and Polynice, and their grandmother Ménécée find refuge in Montreal. They live a quiet, modest life in a tiny apartment in a working-class neighbourhood. A straight-A student seemingly destined for greatness, Antigone (masterfully played by Nahéma Ricci in her first leading role) is the glue that holds the family together. Tragedy strikes when Étéocle is wrongfully gunned down by police during the arrest of Polynice, a small-time drug dealer. Motivated by her sense of duty towards her family and fuelled by the memory she cherishes of her dead parents, Antigone decides to jeopardize her own future to preserve that of her family.
Winner of the Canada Goose® Award for Best Canadian Feature Film at the 44th Toronto International Film Festival, Antigone
acutely explores familial sacrifice, the burden of responsibility, and the nature of justice with exceptional depth and nuance. Although inspired by a story 2,500 years old, Deraspe’s film is a timely meditation — one that prompts serious reflection on immigrant life in an ostensibly welcoming contemporary Canada.
“The film is an incisive critique of the power imbalance between citizens and immigrants and the hypocrisy of an unjust justice system. It jolts the viewer out of complacency.”

Posted by cinemacnc at 20:47 No comments: The latest from Louise Archambault (Film Circuit favourite Gabrielle), adapted from the acclaimed novel by Jocelyne Saucier, is an elegiac and charming meditation on the possibilities of living outside modernity.
As the film opens, we meet three hermits living in cabins in the Quebec countryside, miles from civilization. Tom (Rémy Girard, The Barbarian Invasions, Incendies), Charlie (Gilbert Sicotte, The Salesman), and Ted (Kenneth Welsh, Wet Bum, Adoration) fled society years ago, and have eked out a back-to-the-land existence, selling pot to the closest locals with help from local hotelier Stephen (Éric Robidoux, Love in the Time of Civil War).
But their lifestyle is increasingly endangered by nature, infirmity, and age. Ted collapses from a heart attack. Photographer and researcher Ange-Aimee (Eve Landry) threatens to disrupt their lives when she starts looking for survivors of a catastrophic blaze that happened decades ago, most notably Ted, whose actions during the fire have assumed heroic stature.
And the Birds Rained Down is a tribute to the need to live independently and on one’s own terms — and to those courageous enough to pursue this. (It’s also a cry for respect for people and their choices, regardless of age.) Driven by an astonishing cast boasting some of Quebec’s most esteemed performers — including Andrée Lachapelle, whose career stretches back to 1954 — the film features one of the most beautiful musical moments of the year, when Girard’s ailing musician Tom, coaxed into performing at a nearby club, delivers a soulful and heartbreaking rendition of one of Tom Waits’ best tunes.
“Touching, heartbreaking, and dangerously thought-provoking, And the Birds Rained Down will force you to re-examine your relationship with your- self, the world around you, and the people you love.”
—Anne T. Donahue,  The Globe and Mail

Posted by cinemacnc at 20:43 No comments: 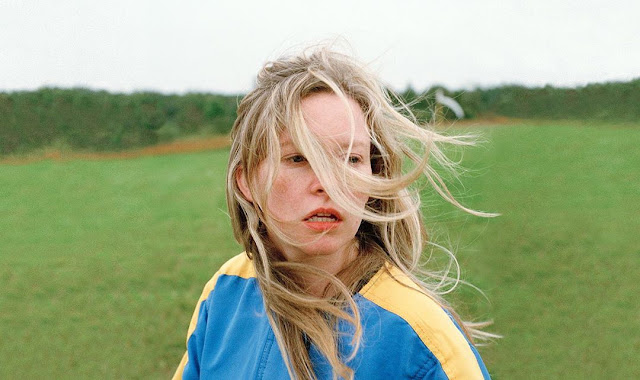 In just two features — TIFF selections Tower (2012) and How Heavy This Hammer (2015) — Kazik Radwanski has emerged as one of the most distinctive young voices in Canadian cinema, with his refreshingly unadorned yet empathic portraits of alienated individuals struggling to keep it together. His latest and best film to date, Anne at 13,000 ft centres on a precarious period in the life of its eponymous Anne, played by an electric Deragh Campbell in one of the year's most staggering performances.

With her best friend Sarah (musician Dorothea Paas), 27-year-old Anne works at a Toronto daycare, where she needlessly bickers with colleagues and is often more interested in fantasizing with the children than in supervising them. For Sarah's bachelorette party, they go skydiving, and Anne seems completely in her element, floating above it all, a true departure from her strained, awkward professional and social interactions (such as the one with new boyfriend Matt, played by filmmaker Matt Johnson). Radwanski's signature hand-held style matches the way Anne fumbles through life. Tight close-ups offer further evidence of Campbell's remarkable, spiky performance, with her character's tremulous shifts in mood and sentiment efficiently portrayed by subtle swings in tone and body language.

Rife with cinematic references, not the least of which is Gena Rowlands' all-out performance in Cassavetes' classic A Woman Under the Influence, Anne at 13,000 ft is raw and unnerving, and a clear evolution in Radwanski's filmmaking. A vivid portrait of volatility, the film provides both clever metaphors and jostling temporal shifts to show the fine line between losing one's ground and wanting, waiting, for one's life to take off.

Posted by cinemacnc at 20:39 No comments: 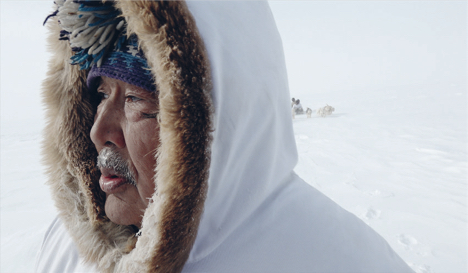 One Day in the Life of Noah Piugattuk
Director: Zacharias Kunuk
CANADA, 2019
Inuktitut w/ English subtitles 112 minutes
Principal Cast: Apayata Kotierk, Benjamin Kunuk, Kim Bodnia
For decades, Zacharias Kunuk has been one of the most exciting, dynamic, and innovative filmmakers in Canada, and indeed the world. With Atanarjuat: The Fast Runner — a prize winner at Cannes and voted the best Canadian film of all time in a recent TIFF poll — Kunuk introduced a film language that combined myth, history, and folklore, an approach evi- dent in subsequent films like The Journals of Knud Rasmussen and Maliglutit (Searchers).
His latest, One Day in the Life of Noah Piugattuk, hinges on a pivotal 1961 encounter on spring sea ice between the title character (Apayata Kotierk, Atanarjuat: The Fast Runner, The Journals of Knud Rasmussen) and other community leaders and a government emissary (Kim Bodnia, television’s Killing Eve), who has come to ask them to relocate their families to permanent settlements and send their children to school. Kunuk employs approaches he used in the previous films, but there are also elements of cultural comedy in the contrast between pragmatic Inuit and the odd, incomprehensible expectations of the government agent.
Those demands will ultimately carry an enormous gravitas. Behind what seems to the hunters to be the government agent’s incoherent requests is a policy that will mean a fundamental rupture in the lives of Inuit. The real Noah Piugattuk was born in 1900 and lived to be 96 years old. In that time, he saw the decline of traditional practices that had persisted for thousands of years and the creation of a new relationship with the Canadian colonial state. In this one day — and this fateful meeting — Kunuk condenses much about Inuit–settler relations. The emotional and historical layers in the film make it one of his finest works.
“The real-time effect ... is compelling as its languor and its repetitions gradually reveal the deep cultural misunderstanding that is going on.”
—Kate Taylor,  The Globe and Mail

Posted by cinemacnc at 20:36 No comments:

The seemingly separate lives of an anxious, disillusioned teen girl and a troubled, alienated man converge fatefully in this haunting exploration of womanhood, isolation, and toxic masculinity, set in 1980s Newfoundland.

Set in suburban Newfoundland in 1987, Nicole Dorsey's debut feature Black Conflux is a dreamy account of two converging lives. Fifteen-year-old Jackie (Ella Ballentine) is navigating from vulnerable adolescence to impending adulthood. Dennis (Ryan McDonald) is a socially inept loner with a volatile dark streak and delusional fantasies of adoring women at his beck and call.

Posted by cinemacnc at 20:32 No comments: